Advertiser Disclosure The offers that appear on this site are from companies from which MoneyUnder30 receives compensation. This compensation may impact how and where products appear on this site (including, for example, the order in which they appear). MoneyUnder30 does not include all companies or all offers available in the marketplace.
#Spending Less

Funny Money: A Quest to Find the Best $1 Burger

Since the dawn of the drive-thru, philosophers have pondered that most trying of propositions — where to go to get the best burger for a buck. There are no easy answers to the quandary, and the solution at which one arrives says as much about the eater itself as it does the burger.

Would you be willing, given no other options, to come up with not just a buck for your budget burger, but a buck and a half?

In an effort to tackle the trying riddle, I plotted out a path to hit five drive-thrus within the span of 30 minutes. I would leave with $6 and return with five budget burgers, finishing my experiment with an incalculably higher cholesterol level and, most importantly, one definitive answer. The corporate pitch: “A hot ‘n juicy beef patty loaded up with cheese, pickles, and onions. Made fresh when you order it. Big on taste and small on price!”

The verdict: Neither hot nor juicy, the patty is thin enough to turn Wendy’s face as red as her hair. It’s covered in something closer to a bread-like beanie than a bun. I do believe it was “made fresh.” Several hours ago. The corporate pitch: “Two 100% beef patties simply seasoned with a pinch of salt and pepper, a slice of melty American cheese and topped with tangy pickles, minced onions, ketchup and mustard.”

The verdict: It’s hard to beat the value proposition of the double patty combo. The generosity, however, stops at the extra beef rations. The crusty double-decker could have used more than the requisite “pinch” of salt and pepper, not to mention the single cheese slice. I longed for the days that actual double cheeseburgers (the McDouble is a double burger, single cheese slice hybrid) were a buck under the golden arches. The verdict: I’m thinking whoever came up with the term “thick-cut” for the bacon inhaled some “natural smoke” beforehand. Still, what little there is added just enough lust to make up for the bland patty. The sesame seeds are a welcome touch, disguising the otherwise boring bread in a mask of quality. 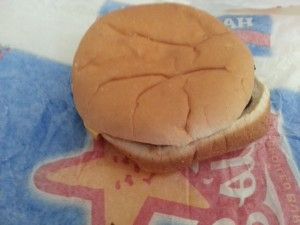 The verdict: The home of the magnificent Six Dollar Burger gives you something precisely one-sixtieth as good as good as its signature creation for your measly buck. Not only does the restaurant openly mock you for your choice of a “kid’s cheeseburger,” it sticks you with a patty that vanishes inside a heat lamp-ravaged bun, like a hockey puck on an NHL broadcast, finger painted with meager condiments. The restaurant: Jack in the Box

The verdict: This inexplicably pricey concoction is the “dollar burger” for high rollers, but unfortunately the added expense doesn’t translate for more burger. You’d expect more for your extra 50 cents, but instead you get the teensiest of all the contestants in our competition. Ah, but there is a bonus here not offered by the rivals — lettuce! The flavorless strands of a whitish-green substance that presumably were leaves in former lives makes this one the choice of junior jackrabbits everywhere, if not so much for humans. This dollar choice seems geared to push you toward the dollar menu choice of two tacos.

The BK Baconburger appears to be the winner on paper, as well as the top choice of my wife, who begrudgingly split the testburgers with me — no doubt before Googling divorce lawyers — but darned if I didn’t prefer the McDouble above all others. It’s not so much the winner as it is the least of many evils. Why? Maybe it was the twin patties. Maybe it was the half-pinch of salt and pepper. Or maybe, just maybe, it was the signature McDonald’s flavor, a cocktail of regret and disappointment, to which I’ve become conditioned since I was a wee lad.

Any of these burgers will suffice if you desperately need calories and are down to your last fistful of change. But — as you can probably tell from the photos alone — if you want a quality burger, you should be prepared to spend more than a buck.

Total Articles: 11
Phil Villarreal writes Funny Money weekly for Money Under 30. He lives in Tucson and works for the Arizona Daily Star. He's also an author, blogger and Twitterer.
Read more from this author