Are Pokémon cards a good investment?

Now that a Pikachu has sold for $5.275 million, you might be wondering: are any of your old Pokémon cards worth anything? And should you buy some cards today as an investment? Not so fast. Despite some high-profile sales, rare Pokémon cards remain a dubious investment at best.

That’s right — he paid the price of a brand new Ferrari or a three-bedroom home in Ohio for a shiny cardboard picture of a lizard. Paul’s record-shattering purchase was part of the great Pokémon card resurgence that began during the early days of COVID-19. And considering cards are still selling for well into the six figures in 2022, “Pokemania 2.0” has clearly outlasted the pandemic and shows no signs of losing steam.

With Pikachus selling for more than Picassos, you might be wondering:

Pokémon card collecting has always been popular, as evidenced by the 43.2 billion cards now in circulation.

But even the makers of Pokémon cards were caught off guard when demand began skyrocketing back in mid-2020. In addition to being fun, addictive, and nostalgic, collecting Pokémon cards during the COVID-19 pandemic even promised a potential form of economic relief.

Soon, celebrities and influencers picked up on the resurging popularity of Pokémon cards.

In early October, Logan Paul live-streamed an event where he opened a rare box of cards worth $200,000 in front of his 22 million subscribers.

Pokimane and other influencers quickly followed suit, offering a Pokémon-flavored version of the ever-popular “unboxing” videos.

Things seemingly came to a head on October 13, 2020, when rapper Logic bought a first-edition, holographic Charizard for an eye-watering $220,574. But now that someone’s bought a Pikachu for more than four times that in 2022, the world’s first seven-figure Pokémon card deal is all but inevitable.

Are Any of Your Old Pokémon Cards Worth Anything?

Like many Millennials in their 30s, I had a binder full of Pokémon cards that my family and I held onto for years. Upon hearing the news that some of them might be worth a 401(k), I immediately called up my mom.

Mom! Do you have any idea where my old Pokémon cards are??

Sadly, she didn’t. Our shared conclusion is that we likely donated them to a kid down the street years ago, along with my old airsoft stuff.

This deflating revelation immediately made me feel like the guy who paid 10,000 bitcoins for pizza.

However, if you’re also fretting over the location of your old Pokémon card collection, I actually have some “good” news for you:

Most Old Pokémon Card Collections Aren’t Worth Anything

The only rare Pokémon card I can distinctly remember having was a holographic Blastoise, which I (ironically) destroyed in the YMCA pool.

I cringed when that memory resurfaced. Surely that card is worth more than a used car today…

Turns out, you can actually buy a collector-condition Blastoise on Amazon for about $100. In fact, holographic Charizards aren’t selling for much more than that.

Well, unlike the $110 eBay Charizard, Logic’s prized Charizard is a:

Any card falling short of those high standards won’t be worth even 5% as much. So whether you’re looking to start investing in Pokémon cards or simply selling your old collection, let’s cover how to spot and appraise valuable Pokémon cards.

How to Spot Rare Pokémon Cards

I’m going to focus on cards printed from 1996 to 2000, for two reasons. Not only are the rarest cards from this era the most valuable, but they’re also the trickiest to identify.

The “Base Set” of Pokémon cards, or the OG cards from 1996 to 1999 that we all know and love, actually came in three flavors: 1st Edition, Shadowless, and Unlimited.

1st Edition cards are pretty self-explanatory — these were among the first wave ever printed and distributed, and as a result, carry the highest collector value.

If you’re wondering why Logic paid 10x what a 1st Ed. Charizard is supposedly worth, it’s simply because card values are hard to predict. Your old rare Gyrados may be appraised at $1,500, but it may sell for $15,000 or $150, depending on the demand that day.

Even so, either scenario is worth a few minutes of rummaging through your old collection. 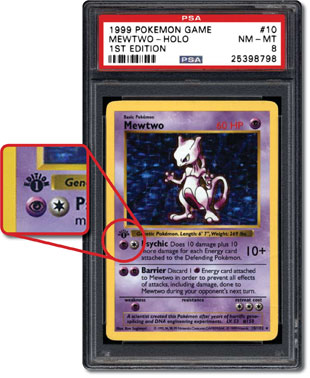 First Edition Base Set Pokémon cards are easy to spot thanks to their helpful stamp. Photo courtesy of Professional Sports Authenticator (PSA).

Wizards of the East Coast, the company that made Pokémon cards until 2003, left a stamp on each of their 1st Edition cards — so if you see this, you’ll want to encase the card in protective plastic ASAP.

Shadowless cards are the second-rarest breed of Pokémon card from the ’90s. These were the cards produced right after the 1st Editions, and are visually identical to their earlier counterparts save for a missing stamp. Aside from a missing stamp, a “shadowless” Base Set Pokémon card is visually identical to a 1st Edition. Photo courtesy of Professional Sports Authenticator (PSA).

They got the nickname “shadowless” simply because they lack a shadowy background introduced in the next wave of cards, the Unlimited.

Unlimited cards make up the bulk of the printing run for the Base Set. These are by far the most common and thus carry much less value for collectors these days. There’s a 95% chance the Blastoise I ruined was a Base Set Unlimited worth well under $100, so I’m not too bummed out about it.

You can spot a Base Set Unlimited card by the much thicker font and iconic “shadow” behind the frame of the Pokémon. To illustrate, here are all three editions from the Base Set, back-to-back:

The last set worth mentioning from this era is Base Set 2. These cards were launched in the year 2000, and were essentially a fresh run of Base Set Unlimited cards. You can spot them by the number “2” with a Pokeball emblazoned on it, positioned next to your Pokémon’s weight.

Collectors tend to value Base Set 2 cards at or slightly below Base Set Unlimited cards.

For better or worse, over 90% of the Pokémon cards from the 90s aren’t worth much. So if you’re panicking over your lost collection, fret no longer — it’s probably worth little more than a few good memories.

However, if you do find a 1st Edition or Shadowless card in your old collection, here’s what to do next.

How to Sell Your Rare Pokémon Cards

Get the Card’s Condition Graded by the PSA

Let’s say you find your old cards and come face-to-face with a 1st Edition Chancey card worth up to $3,500. Sweet!

Now, how do you sell it?

Your first step will be to temper your expectations. Although auction sites will list “estimated values” of thousands of dollars, the resale value at that moment in time could be 10x more or less than that.

In addition to checking TCGplayers, a good way to rapidly appraise your card’s value is to browse recently sold listings on eBay. You can do so by searching for your card, clicking Advanced, and checking the Sold listing box. This particular Chancey was both encased and graded by a company called the PSA, or the Professional Sports Authenticator. The PSA grades the condition of rare trading cards on a quality scale of 1-10, with 10 being known as “Gem Mint.” Cards graced by Gem Mint status aren’t just free of manmade scuffs — they’re free of the most microscopic factory defect.

Generally speaking, most cards handled by children before retiring into a shoebox will score a PSA of 7 or lower, selling for about 5% to 10% of Gem Mint price.

Unfortunately, the news gets worse — any card worth over $500 will likely need PSA grading, and the PSA is currently so overwhelmed that they’ve temporarily suspended most services.

Regardless of which option you pick, how and where should you sell your rare Pokémon cards?

There’s no right or wrong place to sell your rare Pokémon cards. Here are some of the most popular options, sorted by their pros and cons:

Is It Worth Investing in Pokémon Cards Now?

With the values of rare Pokémon cards outlasting many cryptocurrencies, is it really so crazy to “invest” in a Blastoise? Now that you know how to effectively spot a rare, valuable Pokémon card, here are some reasons you should (and shouldn’t) buy it.

Reasons to Invest in Pokémon Cards

Here are four compelling reasons why a small investment in Pokémon cards this year may pay off down the road:

Reasons Not to Invest in Pokémon Cards

There’s a potential upside to investing in Pokémon cards, but as with all unique investments, the cons deserve to be heard:

What Are Pokémon Cards?

For the uninitiated, Pokémon Cards are part of the Pokémon Card Trading Card Game that originally launched in 1996. Back then, the original set contained just 151 cards — one for each OG Pokemon.

Since then, Pokémon has exploded into the world’s most valuable media franchise, valued at over $100 billion worldwide. For comparison, that’s more than Star Wars, Spongebob, and James Bond combined.

Fueling two decades of meteoric growth was a steady stream of new Pokémon creatures — and thus new cards — to collect. There are around 898 total Pokémon and over 9,100 Pokémon cards to collect in the English market.

Not all 9,100 cards are available on store shelves at once, of course. The Pokémon Company International, the folks who make Pokémon cards, publish and release cards one “generation” at a time, with each generation lasting about two years.

In total, there have been eight generations of Pokémon cards since 1996. And as the next generation of cards begins appearing on store shelves, the previous generation tends to sell out. At that point, it’s no surprise that certain cards begin shooting up in value.

Pokémon cards have made a welcome resurgence since the pandemic, providing ’90s and 2000s babies a delightful form of nostalgic escapism. For some of us, the rise in old card values might’ve even provided a pinch of economic relief.

However, despite some high-profile sales and speculation of enduring popularity, rare Pokémon cards remain a dubious investment at best. Even if you put aside the high fees associated with appraising and selling rare cards, the likelihood that you’ll see positive returns on your investment remain slim to none. In short, the risk that you’ll lose money investing in Pokémon cards is just way too high.

For assets that are way more likely to appreciate in value, check out Why Index Funds Cost Less, Reduce Risk and Make You a Better Investor.

And to learn the stupid-simple plan that wealthy people use to get wealthy, check out How the Rich Get Rich (and How You Can, Too!).