What Is r/wallstreetbets, And Should You Take Their Investing Advice?

The infamous subreddit r/wallstreetbets has evolved from an obscure forum into a veritable army of novice investors, some making millions. Should you join the ranks?

I’ve been a Redditor for over a decade. In that time, I’ve learned that most “subreddits,” i.e. discussion threads, can be described in a single word or a sentence at most.

r/UpliftingNews is full of good news.

r/Frugal is full of Redditors sharing ways to save money.

But r/wallstreetbets…where do I even begin.

Trying to describe r/wallstreetbets is like trying to describe fire or the plot of Fight Club. It’s simply impossible in a single breath, requiring plenty of creative space and sweaty mental gymnastics. I mean, how do you quickly summarize a community of 9.5 million “degenerates” vying for “chicken tendies” who somehow decimated a New York hedge fund?

I shall make the attempt nonetheless because every amateur investor should understand the madness behind r/wallstreetbets. If Wall Street is like the Florida coast,  r/wallstreetbets is like a category five hurricane finally making landfall. It simply can’t be ignored.

r/wallstreetbets aka “WSB” is a subreddit (a niche forum on Reddit) dedicated to amateur high-risk investing.

For the uninitiated, each subreddit has its own rules and moderators, and users can post videos, screenshots, gifs, polls, questions, and basic text-based discussions.

Subreddits are created by users, usually to fill a need or a niche. So how did r/wallstreetbets come to be?

WSB started out as a tiny forum for high-risk investors

Back in 2012, Redditor and retail investor Jaime Rogozinski grew tired of being humiliated on the traditional investing subreddits. He had a penchant for proposing ultra high-risk stock trades, which these communities rejected on the basis that pouring money into individual securities was little more than gambling.

Rogozinski, therefore, saw an opportunity to create a new subreddit where retail investors could discuss high-risk trades without being judged, downvoted, and lectured on the merits of Treasury Bonds.

Serving a niche within a niche, r/wallstreetbets was ahead of its time. Retail trading itself wouldn’t really take off until the late 2010s, so r/wallstreetbets didn’t reach its first 50k subscribers until 2017.

But despite subsisting as a Reddit backwater, WSB had already begun developing its legendary identity.

In 2016, WSB cemented its identity by defying the “Pharma Bro”

Even if you’ve only read headlines about r/wallstreetbets, you can probably tell that it’s not your typical investing forum.

For contrast, r/wallstreetbets coexists with r/investing, which has been around since 2008. Although r/investing goes by the tongue-in-cheek description “Lose money with friends!” it still tends to be more of a classroom setting than a house party. r/wallstreetbets is the home of high-risk stock ideas, research optional. That’s not a criticism, mind you – it’s part of their creed: WSB fully solidified its devil-may-care attitude back in 2016. That year, a top moderator grew so tired of the sub’s extremist “YOLO” approach to investing that he proposed a literal ban of the word YOLO.

In a self-righteous manifesto that he pinned to the top of the subreddit, he chastised his fellow “degenerates” for their senseless and reckless approach to investing.

If you thought the moderator sounded a little douchey, your douche detector is working great – the author was Martin Shkreli, aka the “Pharma Bro.” Ironically, when he posted this he was mere months away from his first indictment on securities fraud.

But before the hypocrisy had time to set in, r/wallstreetbets had wholeheartedly rejected his attempts to rein them in. In their eyes, Pharma Bro wasn’t wrong – he’d just completely missed the point of the subreddit.

Early WSBers were well aware that their reckless attitude towards investing was unconventional, unhinged, and hilarious – and that’s precisely how they liked it.

WSB was conceived as a niche within a niche: a place for novice investors to discuss mega-risk trades. So how did a double niche investing forum become the fastest-growing subreddit of all time?

The rising popularity of retail trading apps like Robinhood naturally sent traffic towards r/wallstreetbets over time. Plus, many non-investing Redditors were sucked in by WSB’s unique brand of humor. Like Scorcese’s The Wolf of Wall Street, r/wallstreetbets offers a wildly entertaining, well-stirred cocktail of profanity, debauchery, and money being tossed into the wind.

So while r/investing continued to discuss CDs and CPI reports, r/wallstreetbets simply gave regular Redditors more of what they wanted. To rallying cries damning the 1%: But r/wallstreetbets’ pièce de résistance, the kind of post no other subreddit could offer, was the “Gains” post: Even to the most orthodox investor, seeing a Redditor barely old enough to buy a beer “retiring” with $800k is enough to pique your interest. Here’s another more recent Gains post, where a typical WSBer with no investing knowledge turned $150k into $550k in a single morning.

So in 2020, in the midst of a crippling pandemic, r/wallstreetbets gave America exactly what it wanted: a place to laugh, rage against the status quo, and possibly make gobs of money. To no one’s surprise, r/wallstreetbets had already tripled in size to 1.5 million subscribers before December.

In Q1 2021, as the GameStop episode unfolded in the news, r/wallstreetbets grew from 1.5 million subscribers to 9.5 million in weeks. That’s like the entire population of Hong Kong pouring into Puerto Rico.

In short (no pun intended), two WSBers discovered that if r/wallstreetbets could rally behind GameStop stock, they could short squeeze (read: screw) a hedge fund out of billions. And that’s exactly what happened. Countless Redditors made thousands (some millions), while the freshly-torpedoed Melvin Capital lost over 53% of its value.

As the war rages on, WSBers have already begun sharing how they’ve spent their “tendies,” aka chicken tenders, aka gains from selling their positions. They’ve bought houses, paid off student loans, and even treated themselves to a new Mercedes. 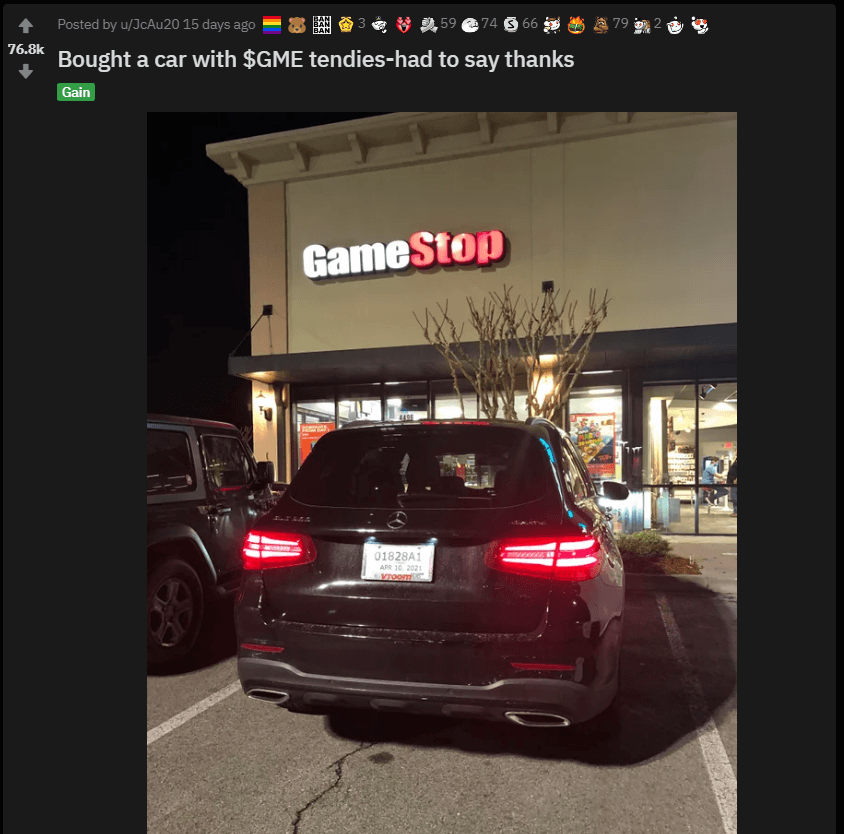 In the end, the most remarkable thing about r/wallstreetbets’ nine-year evolution is just how little it’s changed. WSB has always been a novice investing nuthouse where caution and decorum are left at the door. It’s a Stratton Oakmont trading floor the size of Israel.

Is r/wallstreetbets a force for good?

To financial institutions worldwide, r/wallstreetbets is now the world’s largest standing army of retail investors. It has its own leadership, code of honor, and recruitment tools. It fears nothing, has no political leanings, and can’t be intimidated by the media. Plus, it’s already vanquished its first enemy.

So is r/wallstreetbets a force for good?

Well, despite its rough edges, WSB may create some good for some people.

In addition to a steady flow of memes and self-deprecating humor, r/wallstreetbets has its own lexicon that’s only become more ingrained with time.

The proliferation of r/wallstreetbets has helped thousands, maybe even millions of working-class Americans realize just how easy it is to start investing in the stock market. After all, if these “degenerates” can do it, why not the rest of us?

Its actions may lead to positive change

Even with the battle for GameStop far from over, Netflix has already hired a writer for the film adaptation. Thankfully, the Great Reddit – Hedge Fund War may inspire more than just streaming content.

To lawmakers and citizens alike, the GameStop short squeeze has illuminated some dark corners of the U.S. financial system – places where unscrupulous hedge funds have operated for decades with impunity. Per Rep. Maxine Waters:

“Many Americans feel that the system is stacked against them and no matter what, Wall Street always wins.”

New laws in response to the GameStop short squeeze may be months, even years away. They may not come at all. But even if change doesn’t happen right away, r/wallstreetbets has made abundantly clear that they don’t mind teaching the same lesson twice.

Should you get your investing advice from r/wallstreetbets?

That’s entirely up to you, but generally, no.

Getting investing advice from r/wallstreetbets is like getting your news from The Onion. That’s simply not the point of its existence.

When it comes down to brass tacks, r/wallstreetbets is not an investing subreddit; it’s a gambling subreddit. The stock market is just their casino of choice.

It would be silly to think that r/wallstreetbets has a magic formula turning the odds in their favor. They themselves are the first to admit that most of them lose money “YOLO”-ing into the market.

Sometimes, these losses are staggering: Capital losses are so common on r/wallstreetbets that they have their own flair, or filter. To put a cap on the number of posts tagged “Loss,” moderators had to create a new rule – you can only post your crippled portfolio once you’ve lost at least $10,000.

Even when they share posts illustrating how much they lost, WSBers tend to get tons of upvotes and rewards from other users:

That’s because win or lose, the whole point of r/wallstreetbets is to encourage ultra high-risk investing. As long as you took the plunge, you embodied the spirit of the sub that’s been around since the beginning.

A common counterpoint is “but I want to be there when the next GameStop happens.” Don’t we all.

But it’s critical to remember that the GameStop short squeeze is a war, and wars create massive casualties on both sides. Meme stocks have no intrinsic value propping them up, so anyone who buys shares of GME or AMC during surges will end up losing money when the stock deflates.

WSBers realize this, and they don’t really care (YOLO). But novice investors mistaking r/wallstreetbets for an advice forum or a get-rich-quick scheme are discovering the sub’s true purpose a little too late.

Joining r/wallstreetbets to make money is like joining a bayonet charge to win a medal. Yes, some medals will be awarded, but your portfolio is much more likely to get cut down by shrapnel between the trenches.

The world’s most infamous subreddit, r/wallstreetbets, is many things. It’s a gambling den. It’s a meme factory. It’s the only amateur investing forum where committing financial seppuku isn’t just encouraged; it’s a rite of passage.

But when all’s said and done, r/wallstreetbets is best seen as a source of entertainment. Browsing r/wallstreetbets should feel like watching Jackass; you’ll laugh, cringe, and share clips with friends, but you probably shouldn’t take notes.

Revel in the madness of it all, but earn your tendies elsewhere.