When it’s ok to spend money

Live within your means, yes. Save for the future, yes. But never forget how to enjoy spending some of your money on the things you love. 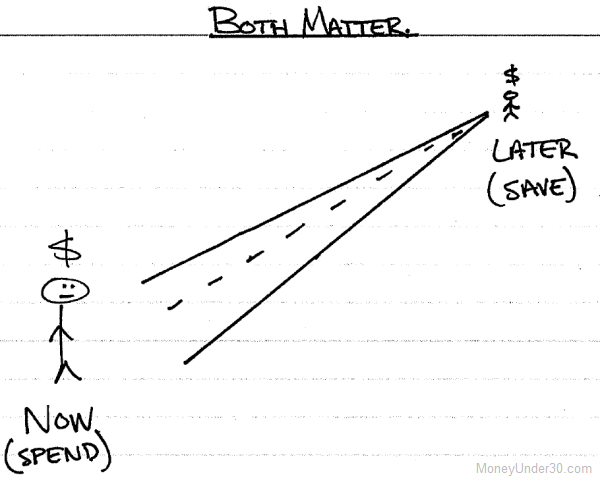 Most readers who email me ask for advice on how to save more and spend less. So, I was intrigued when a reader reached out with the exact opposite problem.

For Cal, living frugally and saving money is so second-nature that it’s actually difficult for him to spend money, even though he has plenty.

As you might imagine, oversaving won’t make you happy.

So not only is it OK to spend money on things that will make you happy now and then, it’s the right thing to do! I believe a big difference between people who are self-assured about their spending and those who aren’t (because they’re either spending too much or not enough), is that the self-assured spenders are spending with intention.

I explain what I mean below, but first, here’s Cal’s story:

“I’m blessed to have two parents who have been pretty cheap throughout their lives. My mom worked at home only because my father is an MD. During my years growing up, I never saw them become flashy with their wealth. Heck, my father drove a 1984 Ford Bronco until 2003.

Due to my father’s hard work and saving habits (must run in my family, as his father is the same way), I was able to attend a private Catholic school without taking out loans (though I did get awarded a scholarship that offset a full year of tuition and expenses).

After I graduated, the job I took and am still in is a bit under my abilities as a CPA and definitely under my potential pay grade. Part of the reason I stay here is because of the comfort and ease of life it allows me, but second, because I emerged from college with no debt, I figured I could make up the salary differential by saving and investing more than my peers could with their college loans to pay off.

Although my take-home salary is pretty decent, I’m living  below my means, both in terms of quality of household and not splurging or vacationing. Most of the time, after expenses, I still take my remaining funds and invest those too.

The problem I have is allowing myself to ease up on my savings.

I would like to own a house soon and I’m getting close to needing a new or used car…but I know if I lower my savings percentage, I’m not going to max out my 401k contributions, which I consider to be a “missed opportunity”.

Aside from those future expenses, I often worry about having enough “emergency funds” since my non-retirement funds would essentially buy a new/used vehicle outright or be a significant chunk of a down payment on a house.”

I’ve known others like Cal, many of whom mastered being frugal during a period of life when they really needed to be. Years later, as they become debt-free and now earn a decent living, they still can’t bring themselves to start buying the things they want.

In my experience, this feeling is natural to some extent. As you move from being in debt to saving money, you don’t want to go backwards. Seeing your balances grow becomes a bit addictive.

In Cal’s case, however, he’s already invested enough that he could have over $3 million by age 65 even without contributing another penny (assuming an 8% average annual return).

Maybe that’s enough for Cal’s dream retirement or maybe not, but the point is, he’s got his long-term saving covered…and then some. Maybe he needs to shift some of his investing to short-term savings so he can spend money and still have cash for emergencies.

Whatever Cal’s decision, it reminds me of this simple point:

The key to financial balance is to both SAVE and SPEND with intention.

You probably have plenty of reasons for wanting to save money. These might include:

Most likely, at any point in your life, you’ll be saving for more than one of these goals at once. If you’re not careful, it’s easy to let all the things you need to save for overwhelm you. As a result, you may become obsessed with saving more and more because, simply put, there’s always something to save for!

If, however, you become more intentional about your saving, you’ll take each goal and determine:

Once you have done this, you can determine how much you need to save. If, however, you discover that you’ll need to save more than you’re able at the moment, that’s OK. Maybe it’s simply time to revisit your savings goals:

When you save with intention, you’ll have a better chance of getting the things you want out of life, but you must also realize that along with intentional saving comes to consciously spending.

Save money for later, but spend some today. Odds are good you’ll live to 90, but you really could be hit by a bus tomorrow!

What makes you happy?

Note: If your sole answer is making lots of money and seeing it pile up in your bank account just because, you could have a money disorder. This is financial hoarding. (Seriously.)

And if you can’t immediately answer that question, then let’s rephrase it. Think back over the last five years. What purchases brought you the most happiness?

For me, it’s been trips and experiences with my family and friends…friends’ weddings in Sarajevo and Puerto Rico, a bachelor party in South Beach, our own wedding and honeymoon.

My car, my iPhone, my camera…these things are nice, too. But over time, I think the money spent on trips and experiences have created more happiness for me.

Still, I know that going forward, I may spend money on new clothes, a newer phone, a bigger TV, etc. And if I’m not careful, soon I’ll be putting off planning my next vacation or passing on joining friends for a long weekend in Vegas because I spent too much on other crap.

Intentional spending is when you determine what makes you the happiest and then plan your finances so that you can afford as much of it as possible.

Here are some examples:

Dan, Emma, and Mike all enjoy things that cost money—big money, in fact. So if they’re not intentional about their saving first, they could obviously become financial train wrecks.  (Of course, this happens to a lot of people who develop tastes for expensive things).

As long as they save intentionally first, however, they know what they have left to spend today. Then, it’s simply a matter of determining how you’ll spend on this, and how much on that. The goal is to plan your finances so you can spend more on what you value and less on what you don’t.

If you, like Cal, find yourself having obtained plenty of financial security but are unable to spend money, my advice is to revisit your intentions. What are you saving for? How much will you need? And what will it take to get there?

Next, what would make you happy today? How can you use some of the money you’ve earned to achieve that?

Total Articles: 304
David Weliver is the founder of Money Under 30. He's a cited authority on personal finance and the unique money issues he faced during his first two decades as an adult. He lives in Maine with his wife and two children.
Read more from this author